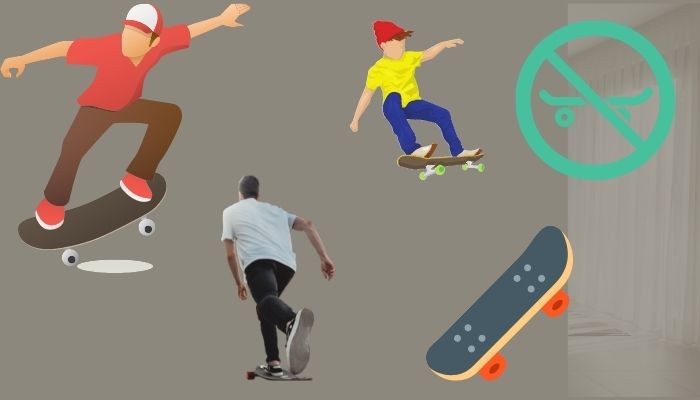 For stopping on a skateboard, it is important to use your push foot properly and on time. A skateboarder must be alert at all times and have their final point in mind which helps them stop without getting a skateboarding injury.

You must be thinking about how to stop on a cruiser skateboard? You can find a detailed explanation regarding this topic in a section ahead.

While using your foot properly is crucial, you also need to master the method of tail dragging which is by far one of the most effective ways to stop an in-motion skateboard.

How Should a Beginner Stop a Skateboard Properly?

Like riding, stopping, or applying brakes to a skateboard is an art in itself. Your right foot and left foot should be in perfect synchronization to stop a skateboard properly and avoid unwanted skateboard injuries.

Foot braking is an attractive and popular method among professional skaters to stop the skateboard wheels effectively. 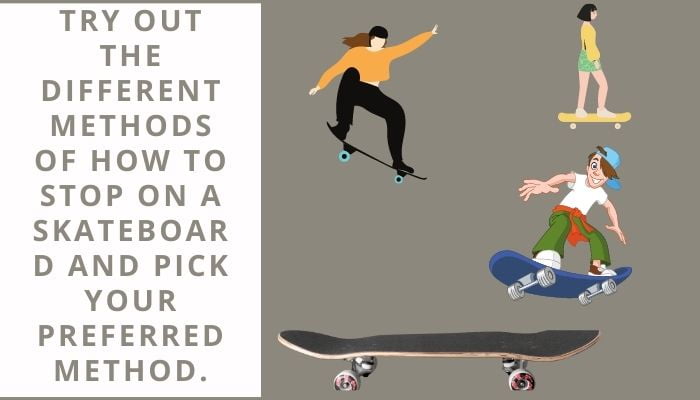 How to stop on a Skateboard like a Pro?

Coleman slide is one the most popular types of sliding methods wherein the skateboarder rides a normal or an electric skateboard by sitting on it. This posture not only gives traction to slow down and skid but also helps you on how to slow down on a skateboard downhill.

Having the proper safety gear is also crucial while practicing the process of stopping on a moving skateboard.

Keep on practicing to master the art of stopping like a pro.

How to Stop on a Skateboard with a Hand?

Stopping a moving skateboard with a hand is a very risky method but it is not impossible. With adequate practice and precision, a skater can effectively stop a skateboard with their hands.

Again, ensure that you have the right safety gears to protect your palm and your wrist since sustaining an injury might be costly in the long run.

What is the Best Way to stop on a Skateboard as per Professionals?

According to experts and professional skaters, there is particularly no best way to stop on a moving skateboard. Though there are numerous ways to stop while riding on a skateboard.

Some ways are mentioned below

Most of them would advise you to judge your environment and your potential before proceeding with any of the methods of halting a skateboard.

After you know your environment and various methods of how to stop on a skateboard, you can put your plans to action and be a pro in stopping on a skateboard.

How to Powerslide on a Skateboard Perfectly?

Powerslide is another method to bring the skateboard to a stop wherein the rider turns the deck or the board sideways. This makes the wheels flow in an opposite direction which in turn skids and halts the skateboard.

The rider needs good practice and precision before using the power slide method. Pulling out this trick needs some calculation beforehand.

To do it perfectly you need to flip the board with your feet in such a manner that it turns to a horizontal position along with the wheels. The ground resists the natural flow of the wheels and hence stops the board or at least slows it down exponentially.

How Do You Stop a Skateboard Going Fast in Motion?

Stopping on a skateboard while at a very fast motion is pretty difficult and if you are one of those who still practice at a skate park, it might seem quite a tedious job to bring the skateboard to a halt.

The most effective maneuver to stop on a fast-moving skateboard is tail scraping. Most professional skaters prefer this method to stop the board with precision.

This method takes a lot of practice and once mastered, it can be used to show off your skateboarding skills.

How to Break a Skateboard Speed Effectively?

There are various ways to break a skateboard’s speed, among which the foot brake is an effective one. Here, the rider uses their heel to drag it on the ground which creates friction and as a result brings the skateboard to a halt.

But keep in mind to use the right protective gear like wrist guards, elbow pads, knee pads, and shin pads to protect you from performing these risky stunts.

How to Stop on a Cruiser Skateboard with Precision?

If you are wondering how to stop on a skateboard, Braille Skateboarding is a YouTube channel that explains effective methods to stop on a cruiser skateboard.

This channel also explains ways to use the tail end of a skateboard deck to stop the board with poise and precision.

While on a cruiser skateboard, riders can also use the slide stop method to come to a stop while riding it with pace. Keep in mind that slide stopping needs strong and tight skateboard trucks. If there are loose trucks or wheels, it may cause disruption of the process and injuries.

Everything about How to Carve on a Longboard

Carving on a longboard is by far one of the most satisfying feelings for a skateboarder. The best part about carving is it does not take much time to practice. Though it can be termed as a skill move, it is nothing but very simple to pull off.

Within a few days of handling a specific longboard that needs to have a good base plate, you can start to learn carving which is nothing more than taking mere turns.

With a good body stance and enough weight management on the deck, one can easily glide and carve through the air to give turns to the longboard.

Again, with constant and adequate practice you will also be able to take sharp turns with the longboard given that the bushings are fitted properly.

How to Stop on a Longboard While Riding?

Longboards are typically very easy to stop while riding on since they have a bigger structure than a traditional skateboard.

Their weight provides some advantage while stopping effectively.

It is also possible to stop while carving or performing a slide. The heel scrape method is the most common and popular way to stop a longboard wherein the rider puts their heel down on the ground making friction work and bring the board to a halt.

Make sure that the pivot cups attached to the base of your board are fitted properly to avoid unnecessary breakdown.

Read More : Differences between a Longboard and a Skateboard

Riding a skateboard might be very exciting for you, but you also need to know the basics as well as master how to stop it. The process of stopping can be a very challenging one since you need precision and decision-making power to know where to start and where to stop.

Once you have mastered the various maneuvers to stop on a skateboard you can keep on practicing them to be even better at it. Accordingly, you can select your situation to put them in use and be the best among all others.

You also have to keep in mind that be it a skateboard or longboard, their conditions should be perfect and usable since broken or unmanageable boards are a source of huge risk while you try to stop it.

Now that you know all the methods and how to stop on a skateboard you can rock the streets and show off your professional skateboarding skills. Urmi Rudra
Hello, I'm Urmi Rudra. Blog writing is my hobby. My passion is to research a new topic gather knowledge and create a new idea. I like sport mainly skating. I always share my updated knowledge about skating to write a blog. If you satisfied to read my article and get your reliable information then please share my article on social media and also hit the like Button. And if you give me any suggestions feel free to drop your valuable comment in the comment box.

Latest posts by Urmi Rudra (see all)
Share Us

All the mirages and confusion that you have related to skating find a solution here. We are dedicated to arranging all the skating related information in a single platform, which is Skatingkits.com.